#1 SELLING TOY IN THE WORLD - HOTWHEELS – Scrumdiddlyumtious Skip to content
Cart
SUBSCRIBE TO GET 10% OFF YOUR FIRST PURCHASE. FREE SHIPPING AND MONEYBACK GUARANTEE!!!

With 16.5 cars sold every second, its no wonder hot wheels has become a Culture all on its own and having kids that are die hard fans, not only did we add a product page dedicated exclusively to hot wheels but we decided to dive into its history.  Hot wheels turned 50 this year so its only fitting to travel back in time to its birth.

The Birth of Hot Wheels

The “Sweet 16,” the first set of die-cast cars, included custom designs based on real life hot rods and reflected California’s custom car culture. Speed, power and performance were the common attributes shared by every car that bore the Hot Wheels name. Mattel co-founder Elliot Handler first entered into the die-cast car business while playing with his children in 1966.  He realized that the die-cast cars available at that time were rather lackluster – not very agile and lacking a wide range of models and variations. 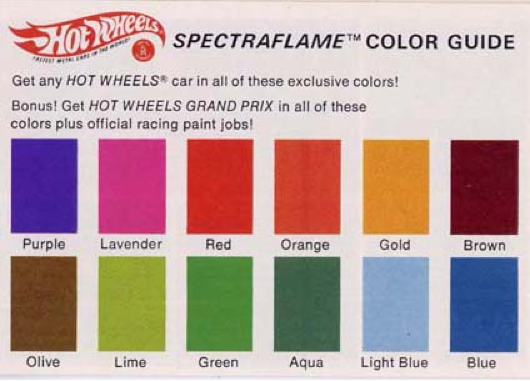 The Hot Wheels design team knew that the key to the brand’s success was in the speed of the cars. Kids wanted their cars to be fast and the design team delivered. The suspension in the original Hot Wheels cars utilized a thick gauge music wire as the axle, which when lubricated and coupled with a unique plastic bearing, allowed the wheels to roll and spin freely with minimal friction.
The design team also zeroed in on making the cars eye-catching, accomplished through the unique “Spectraflame” paint jobs the cars sported. By polishing the car bodies down to an almost mirror shine and spray-painting them with a transparent colored paint, the result was a candy-colored, metallic finish the likes of which had never been seen before.
With sleek silhouettes, huge supercharged engines and wide back wheels, these customized cars raised the bar for toy and automotive designers alike by creating cars that challenged traditional car design limitations.

The first line of Hot Wheels die-cast cars introduced were called “The Sweet 16,” and made their debut at the International Toy Fair in 1968. “The Sweet 16” were 16 cars whose designs were inspired by California muscle cars and hot rods.  The first Hot Wheels toy car offered was the Custom Camaro®, sold on May 18, 1968 – Hot Wheels’ official “birthday.“
Following the Custom Camaro®, the 15 other cars in the line were the Beatnik Bandit, Custom Barracuda, Custom Corvette®, Custom Cougar, Custom Eldorado™, Custom Firebird®, Custom Fleetside, Custom Mustang (shown above), Custom T-Bird, Custom Volkswagen, Deora® (now called Dodge Deora Concept), Ford J-Car, Hot Heap™, Python (now called Cheetah ™) and the Silhouette®.
Hot Wheels went on to influence car culture and real-world car design by creating toy cars that looked radically different from anything else on the road in 1968. To this day "The Sweet 16" remain among the most valuable and collectible toy vehicles ever made.
But this is just he tip of the iceburg when it comes to the history of hot wheels and you can enjoy more fantastic facts at hotwheelsmedia.com
Share Share on Facebook Tweet Tweet on Twitter Pin it Pin on Pinterest
Back to News